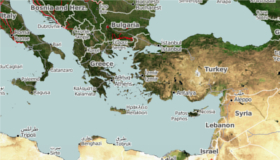 Watch a video version of this briefing

What is the relationship between climate change and human movement?

Natural disasters across the world displaced 22 million people in 2014. Most of the displacement was created by weather related disasters. There are important connections between climate change and the movement of people.

When people are forced to move by the impacts of climate change, they usually move internally rather than across international borders.

In response to sudden disasters such as floods and typhoons, which are increasingly exacerbated by climate change, people often move a short distance to the nearest place of safety within their own country, and often return after the disaster during reconstruction.

In response to slowly unfolding climate change impacts such as droughts, people often move to find alternative work as their livelihoods are eroded. People usually move within their own country rather than crossing international borders. As agricultural livelihoods are degraded, people often move from rural to urban areas where alternative work is available. Rather than entire families moving together, one or two individuals will move at a time.

In some cases, both sudden and slowly unfolding weather-related disasters can create movement across borders. However, this is usually only the case when several other forces are at play. Cross border migration is more likely to happen when a climate linked disaster is combined with other political factors such as conflict or persecution.

“And since there was the war, we did not receive any support from the government. Therefore, there are combined factors that made us suffer: droughts and war. If war did not exist, then we might have been able to stay, but now that the land is looted, there is no way for us to claim it.”
Somali farmer, Nakiavale Settlement, Uganda (UNHCR / UNU)

In the future, climate change is most likely to create patterns of migration and displacement that follow these existing patterns. There have been a number of media reports suggesting that climate change might create future crises like the one currently taking place in Europe and the Middle East.

However it is clear that most future climate-linked migration is likely to be internal and short distance rather than across continents.

Podcast: understanding slow and rapid on set disasters. Listen to our podcast exploring testimonies from people moving due to climate linked events.

Moving Stories: testimonies from people who in the context of climate change. Testimonies and analysis exploring the links between climate and migration.

Myth buster: climate change, migration and displacement. What we know and what we don’t know about the links between climate and migration

Are any of the refugees entering Europe fleeing the impacts of climate change?

Whilst climate change is increasingly a driver of internal displacement, most of the people currently entering Europe are fleeing the conflict in Syria. Others are fleeing from conflict and human rights abuses in other countries such as Afghanistan and Eritrea. However some research suggests a connection between climate change and the drought that immediately preceded the conflict in Syria. The main driver behind recent increases in the numbers of people fleeing relates to the worsening of the violence in Syria, and the deteriorating situation in many of the refugee camps along the Syrian border.

​Climate change and the situation in the Mediterranean​. Our analysis explores the key drivers behind the increased number of people crossing the Med

Was the war in Syria caused by drought and the impacts of climate change?

The causes of the four-year conflict in Syria are primarily political. Key among these was the attempt in 2011 to overthrow the Assad regime, which subsequently descended into an ongoing civil war. Some recent research suggested that a prolonged drought just before the 2011 uprising may have been an important factor, but it should be seen as only one contributing factor.

Infographic: Understanding the connections between climate and conflict This infographic explores and critiques the possible links

Analysis: Climate change and the Syria conflict Researchers have claimed an important drought. We examine the findings in detail.

Analysis: Climate change, terrorism and the rise of ISIS. Media reports have pointed to climate change as a driver of terrorism. We examine the claims.

How should we respond?

We support a series of legal and political responses that are designed to support and protect people who might be displaced by climate impacts, or who may want to move as a way of adapting to climate change. The need to create safe and legal routes for people to move are at the heart of these responses. This applies to both the current European situation and future displacement and migration that might occur in response to climate change.

Briefing: Protecting the rights of people who move in the context of climate change