Climate change and the tragedy in the Mediterranean – are there connections? 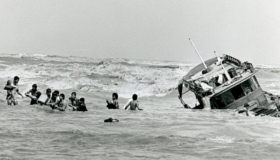 This article was first published in Responding to Climate Change.

Why are so many people drowning in the Mediterranean? The short answer is this: we cancelled the search and rescue operation.

Worse, we decided to cancel it because we knew it would make the crossing more perilous, and this – European governments hoped – would act as a deterrent to future migrants.

It may be that climate change will cause more people to attempt this perilous journey in the future. There is only one sensible answer to this. Create a safe, legal way for people to enter the EU.

The prospect of a climate change creating a bigger ‘push’ factor in Africa and the Middle East makes the creation of these safe, legal options more important. 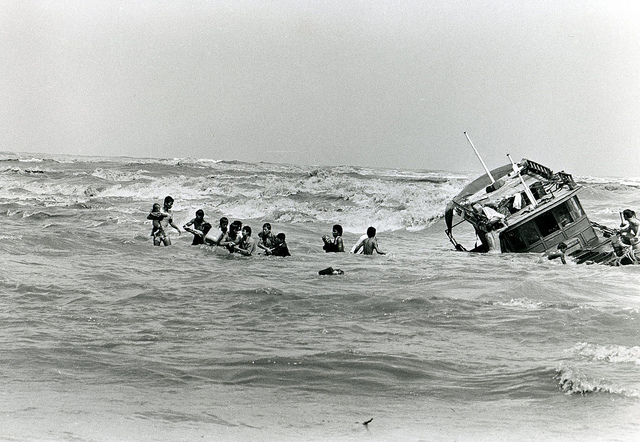 Image: The arrival on Malaysia’s coast of a small boat with 162 Vietnamese refugees on board. The boat sank a few metres from the shore. Migrants and refugees taking risky journeys in boats is an issue across the world.  UNHCR photo unit / K.Gaugler. CC BY-NC 2.0)

Climate change combined with “tough immigration policies” is a recipe for tragedy. When people are fleeing appalling situations – war, starvation, drought – they will go to great lengths to find safety. They are not deterred by borders, fences, deserts and oceans. People will risk their lives.

Attempts by developed countries to stop migration usually have limited success. As we’ve seen in the Med – cancelling the rescue operation and making the crossing even more lethal – has not put people off.

Many of the people making the crossing are fleeing conflict. Many come from three conflict zones: Syria, the Horn of Africa, and the lingering conflicts resulting from the Arab Spring.

The same goes for Syria. Explaining the driving forces behind the conflict requires examining the role of rural-urban migrants in Syrian cities. They swelled the ranks of the rebel forces who were prepared to fight the Assad regime. The severe and prolonged drought resulted in millions of Syrians leaving the countryside and coming to cities. So again, there may be a link to climate change.

Climate change is part of a web of forces that are resulting in people trying to cross the Mediterranean. It may not the most important factor, but it is part of the explanation.

This complex web of causes tells us something about how the EU must react. The safe legal route into the EU must not be defined by what people are fleeing, but rather how vulnerable they are.

Essentially, the safe legal route into the EU must be open to anyone who needs it. Anyone who needs to escape, regardless of whether climate change has played a role in creating their distress. We explored how to do this in a series of reports.

My fear is that we do exactly the opposite. The prevailing discourse in the climate and migration discussion is one of security. Migration is seen as a problem. Migrants are seen as a threat. Climate change – we’re told – will create unmanageable migration crises.

I believe that climate change will shape migration in the future, and very likely is already. But I don’t believe that migrants and refugees are threat, a security problem or reason to pull up the drawbridge.

The security discourse tends to promote policies that are about controlling and stopping migration. But this is exactly the opposite of what we need to do.

As we’ve seen this week, trying to stop people from moving often results in tragedy. Climate change will result in more people trying to move. They only humane and logical response is to let them move safely and legally.