Commentary versus evidence in the climate / conflict debate

Climate change will force to UK to commit its armed forces to new overseas conflicts. This is the belief of Navy Rear Admiral Neil Morisetti. The impacts of climate change, he argues, will destabilise already vulnerable areas. Droughts, heat waves and floods will tip conflict prone areas into full blown war. The UK will have no choice but to respond. Our armed forces will be deployed across the world to protect British interests in the face of an unstable climate.

But is he right? It’s certainly a compelling story.

Morisetti is not alone in his views. In the US the Quardillenail Defense Review recently identified climate change as a new threat to American National Security. The four-yearly assessment by the Department of Defence scans ahead looking for new threats the US. The review identified many of the same issues as Morisetti. Increased frequency of disasters, droughts and displacement would tip the balance in already unstable places. A group of retired US military leaders reached almost the same conclusion.

The Centre for Naval Analyses – a Washington-based military thinktank – asked the retired military figures to asses the risks to US security posed by climate change. Again, the same answer. Disasters, displacement and food shortages would tip the balance. Places already on the edge of armed conflict will be tipped over the edge. The US military will be drawn into the conflicts. Either to protect US interests, or to offer humanitarian assistance. Either way forces will be deployed, lives will be at risk.

With such bold claims you’d expect some very strong evidence to back them up. After all, these military figures and experts are talking about how the armed forces will have to change over the next 50 years. They are trying to shape the kind of armed forces their nations will have. Politicians should rightly ask: what evidence is there to support their claims?

Let’s be clear: this isn’t about contesting the connection between human carbon emissions and the warming planet. This has been established for decades.

Further, we do not need to contest the connection between a hotter planet and various kinds of disasters. The connection between rising global temperatures and heat waves, flooding and increased storms is well established. It isn’t about questioning the link between these events and humanitarian disasters either. The evidence connecting altered rainfall, drought and food shortages is clear. The evidence linking increased rainfall, flooding and displacement is also very well established.

What I do want to question is the link between these humanitarian disasters and an increase in armed conflict.

This is where the academics get involved. As you’d expect, they don’t all agree. Before we delve into why they disagree about the climate – conflict connection its worth looking at how these researchers study it.

This group of academics use two kinds of data. First data about the weather. Changes in rainfall patterns. Data about temperatures and heatwave. Data about the frequency and intensity of hurricanes, typhoons and floods. Most of this comes from the Met Offices and Governments of countries all over the world.

What about data on conflict? Several conflict databases exist. The one most frequently used is compiled by the University of Upsala in Sweden. They gather data from governments, the media and the UN about how many people were killed or injured. They try to establish exactly when and where it happened. And which armed forces, rebel groups or insurgents were involved.

There is a heated debate about whether climate change was one of the forces that created the conflict in Darfur.

Now our academics try to combined various parts of these data sets and look for correlations. Are there more battle deaths in hotter years? Do more conflicts breakout in years with less rainfall? Do more people die in battle shortly after natural disasters? Using all this data the researchers can begin to answer these questions.

The answers to these questions have huge implications. If the relatively small changes we’ve already seen are leading more violence, then this is very worrying. What will happen as temperatures continue to rise?

The problem is, different academics have reached strikingly different conclusions. Some found powerful connections between altered weather patters and increased levels of conflict. Others found exactly the opposite.

These opposing conclusions lead to a heated academic dispute towards the end of 2014. Researchers Burke and Hsiang set about trying to resolve it once and for all. Rather than going back to the original data on weather and conflict, they tried a different approach. They took much of the existing research and work and asked whether – on balance – it pointed towards climate change increasing or decreasing violence. When all of the previous studies were looked at as a whole, what could they tell us?

Their conclusions were shocking. They found that the combined weight of 50 studies on climate and conflict pointed to a powerful connection. The affects of climate change, they argued, were already leading to an increase in violence. Even though some of the 50 studies pointed to a decrease, when looked at together, there was more evidence pointing towards a powerful increase.

But a group of rival academics were having none of it. Burke and Hsiang had excluded a number of key studies from their analysis. When these studies were put back in the mix, everything changed. The climate – conflict connection was much weaker. Further, Burke and Hsiang had also included some studies that were actually about crime, not warfare. And some studies comparing archaeological evidence about weather and conflict from civilisations hundreds of years a ago. Can these studies really tell us anything useful about organised armed violence in modern societies?

When these studies were removed from the mix the connection was weaker still.

So can we draw anything useful from this? First, none of the evidence – from anyone – says there will be an increase in inter-state warfare. It seems (fortunately) that climate change will not cause countries to fight each other. Further, none of the studies suggest that climate change will lead to fundamentally new kinds of conflict. There is some kind of connection between altered weather patterns and civil wars and inter-group violence (two non-government forces fighting each other).

The two sides of the academic debate disagree about how important climate change is. But they agree that when compared to the other forces that create conflict, it is not that important. Other problems – especially weak government institutions, poverty and vast disparities between rich and poor – are still the primary drivers of conflict. We must not ignore climate change as a force that might lead to conflict in the future. But if our aim is preventing conflict, then our focus should remain on tackling poverty, reducing inequality and helping countries build strong democratic institutions. 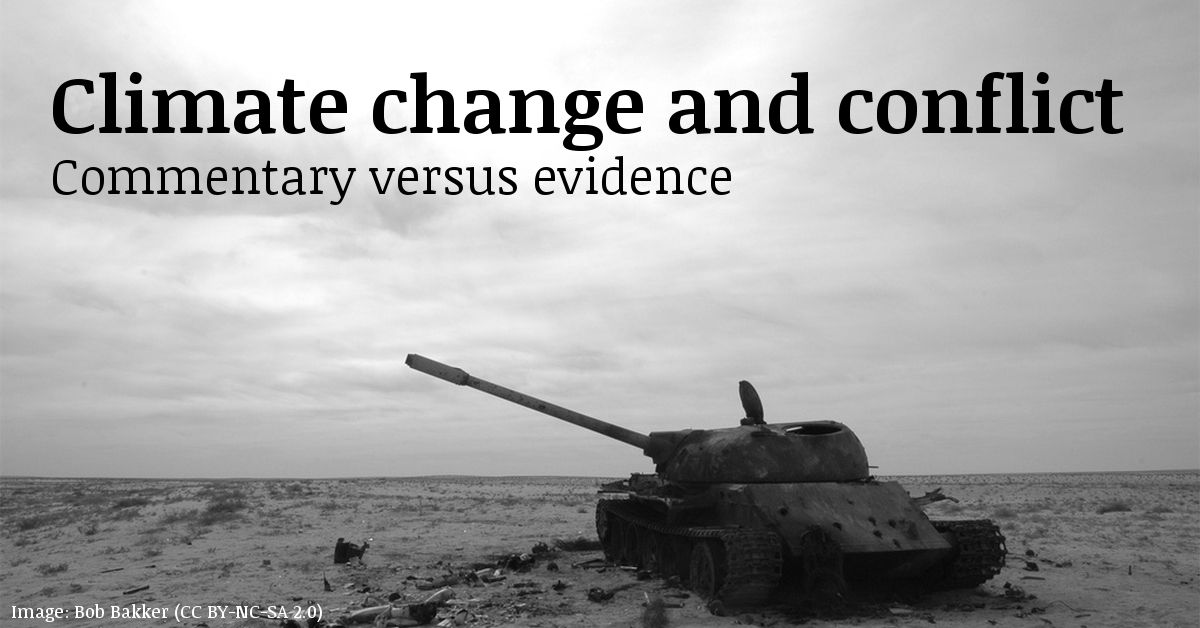