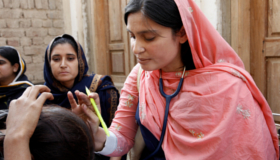 Last week I was on a panel that discussed the relationship between climate change, migration and health. The Royal Collage of Physicians performed a vital task in bringing together experts from these fields to explore the connections. The audience also provided vital insights into how climate linked migration might impact their work.

Inspired by the debate, here are my reflections of the issue as a whole. We’ve also created some infographics to help unpick the complex causal relationships that exist between these issues.

Is this a separate issue to the climate and health debate?
Yes I think it is. There is a growing literature on the connections between climate change and health. This often focuses on the health implication of rising temperatures, the spread of diseases to new areas and diet impacts of reduced agriculture. The Lancet released an assessment of these impacts in 2009 and is due to release another one shortly. The case I want to make in the following points is that the climate – migration – health nexus is actually a different issue.

Causal connections
There are two (complex) but distinct ways of connecting the three issues of climate, migration and health.
The first begins with the climate- health connection discussed above. But adds migration as a possible outcome of declining health resulting from climate change impacts. One of the forces that makes migration seem like an appealing option in the face of climate change could be declining health. Poor health could be a mechanism through which climate change impacts create the movement of people.

The second is to see climate linked migration and displacement as a force creating poor health. Migrants and displaced people often suffer unique and extremely difficult combinations health problems. These are often exacerbated by not being able to access medical care at all. And the health implications of making dangerous and difficult journeys. As climate change begins to reshape some patterns of migration and displacement, it may be that more people find themselves in these circumstances.

Poor health can therefore be a cause of movement as well as a consequence of it. 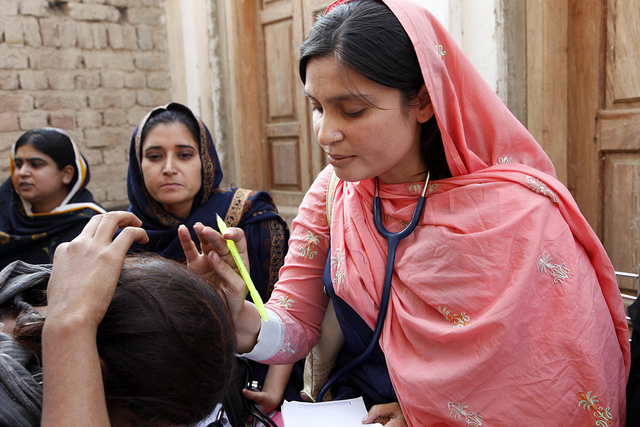 A doctor working at a mobile health clinic. The mobile clinics were established in Pakistan after flooding destroyed clinics and hospitals across the country in 2010. (CC BY 2.0) Russell Watkins / DFID from Flickr.

Migrants and the spread of disease
The debate about migration and climate change has always had some unhelpful elements. People fleeing climate change are often painted as a threat to the national security of developed countries. The image of the “climate refugee” and the idea of mass sudden migration linked to climate change has fuelled this.

There is a risk a narrative emerges in which climate change migrants could themselves be seen as the means by which diseases are spread to new areas. This seems to be nothing but a novel way of painting a vulnerable group of people as a threat, and fuelling existing prejudice. The debate about climate, migration and health needs to be about the well being of refugees and migrants. We must not allow the debate to be hijacked by people wishing to make it about the imaginary threat posed to the health of Western citizens by migrants and refugees.

Climate, migration, conflict and injury
Another connection that has been made is the relationship between climate, migration, conflict and injury. I think there are important connections here, but the causal links between these issues are not straightforward. The connection between climate change and conflict is controversial and contested. However the weight of evidence does point towards climate change playing a small but important role in increasing the risk of civil conflict. But the evidence does not show climate-linked migration as being the cause of this conflict.

In the digram below I think that (1) presents a simplified but compelling causal route connecting these issues. However (2) is less convincing because there is little evidence suggesting migrants and refugees are a ‘vector’ for violent conflict. 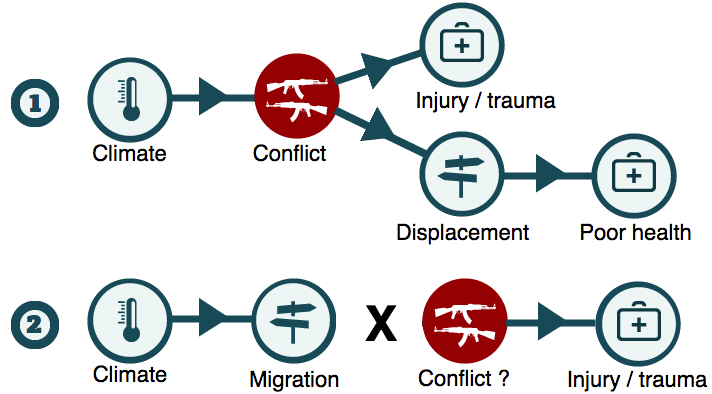 The way forward
These connections – complicated as they are – add weight to the argument for allowing more movement and creating options for people to move safely and legally. To the extent that people are facing ill-health due to climate change, moving could provide a way of protecting themselves against this. It is also clear that many people face incredible risks to their health while moving. The lack of legal migration options forces people to seek out dangerous routes that often result in injury and death. By making legal migration easier, people would have a way of protecting their health in the face of climate impacts. By increasing the number of legal migration options, the risk faced by making journeys would also be reduced.