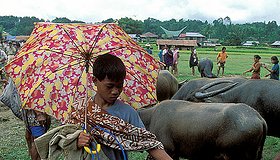 We asked a group of legal and policy expert for their view on the recent court case that grabbed media headlines.

“The case is far more interesting than the headlines suggest. Zeke Simperingham, an international lawyer with NGO Displacement Solutions puts it bluntly: “This decision of the New Zealand Immigration and Protection Tribunal does not grant the applicants refugee status under the 1951 Refugee Convention. The applicants are not the world’s first climate change refugees.” But the case has forced the issue into public debate, argues François Gemene of the Institute of Political Science, Paris. “The reality is always a bit twisted by the media (but which reality isn’t?), but cases like this signal that the whole issue of climate and migration is not just a matter of environmental politics, but has much wider political implications,” he says. Responding to Climate Change

For more background information on this case, look at our Q and A article published by Carbon Brief.

Solomons town first in Pacific to relocate due to climate change

“Under threat from rising sea levels and tsunamis, the authorities of a provincial capital in the Solomon Islands have decided to relocate from a small island in the first such case in the Pacific islands. Choiseul, a township of around 1,000 people on Taro Island, a coral atoll in Choiseul Bay, is less than two meters (6.6 feet) above sea level. Its vulnerability to storm surges and tsunamis caused by earthquakes is expected to be compounded in the future by rising seas.” Reuters

Along with dozens of other farmers in the western Himalayan village of Namli Mera, Muhammad Naeem had been planning to give up agriculture and move to a nearby city. Resigned to opening a roadside coffee stall or working as a labourer in an auto shop, Naeem decided two years ago to abandon his potato fields after losing much of his three hectares of terraced farmland to soil erosion and landslides – problems that have become more frequent due to intense rainfall in the area. Prevention Web

There has been a lot of media coverage recently about the June 4, 2014 decision of the New Zealand Immigration and Protection Tribunal, heralded as the first legal recognition of “climate refugees” focusing on a family from Tuvalu. But this is not so. Despite what the media suggests, the decision was based on purely humanitarian and discretionary grounds – not on any domestic or international legal obligation. The family was allowed to stay because of their strong family ties within New Zealand, not because of the impacts of climate change in Tuvalu. In fact, the Tribunal expressly held that the family in this case was not entitled to protection under refugee law or human rights law. Brookings