Doha: will this year’s climate negotiations create better support and protection for people at risk of displacement linked to climate change? 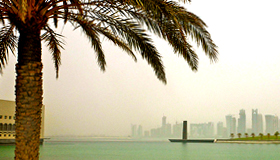 Migration and displacement are rarely talked about in news stories about UN climate negotiations, in spite of the fact that some interesting progress has been made on these issues. This year’s talks in Doha are no exception.

The Foundation for International Environmental Law and Development has produced a short report of the areas of the talks that look at migration and displacement and the potential they hold for creating more support or legal protection for people at risk.

The most significant advance at the negotiations was two years ago when the talks took place in Cancun. The statement agreed “invites all parties” to consider

“Measures to enhance understanding, coordination and cooperation with regard to climate change induced displacement, migration and planned relocation, where appropriate, at the national, regional and international levels”.

Although this might seem like tiny piece of text it is actually very important. It indicates a first step towards considering displacement and migration within the UN’s climate negotiations. The paragraph could either be strengthened or diluted at Doha over the next couple of weeks.

The negotiations also contain a stream of talks focusing on “loss and damage”. This essentially means the ways in which countries might deal with the effects of increasingly severe and frequent natural disasters. Negotiations around loss and damage recognise that while adaptation might allow some areas to change and accommodate some of the effects of climate change, many areas will be facing sudden shocks that will create widespread loss of life, injury and damage to property and infrastructure. These disasters may also have migration and displacement consequences. In previous rounds of talks island states and Least Developed Countries have made proposals that would help them cope with the loss and damage associated with disasters. Their proposals included insurance and compensation to help with the financial costs of “rehabilitation” of areas damaged by disasters. The insurance and compensation could have helped these countries support groups of people forced to move by disasters. However the proposals were rejected.

As the Field report concludes:

The question now is: will climate displacement and migration finally be fully and bravely addressed in UNFCCC negotiations? Or is the future of climate exiles best determined through bilateral and regional agreements? It is clear that attention has been building with regard to this situation, but more action and international commitment is needed for more concrete steps towards dealing with the individuals vulnerable to climate displacement and migration, who ultimately face a rather bleak and uncertain future without sufficient legal safeguards to protect their rights or interests.