Trapped Populations – Hostages of Climate Change and other stories 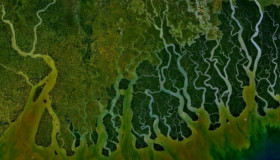 “When a natural disaster strikes, people are sometimes left with no choice but to leave the areas affected. Yet, for some, even this option might not exist. While many could be uprooted in search of a safer place to live, either temporarily or permanently, some may become “climate hostages”, unable to escape. “People around the world are more or less mobile, depending on a range of factors,” argues Prof Richard Black from the School of Oriental and African Studies at the University of London, “but they can become trapped in circumstances where they want or need [to move] but cannot.” IPS

We’re quoted in this article on Carbon Brief. The article and research provide a useful counter point to other stories this week that drew a strong connection between climate and conflict, and (wrongly) identified migrants as a powerful vector for the spread of violence.  “Analysis of violent events in the past 30 years in sub-Saharan Africa reveals a link to high temperatures, a new study finds.However, the researchers say the impact of climate is less important than many other social and economic factors.” We argued: “This has important implications for future research and peacebuilding. It suggests that some conflicts in some areas might be sensitive to climate change, while others are not. It would be a mistake to design policy assuming that climate change will have a universal and consistent impact on conflict.” Carbon Brief

Climate change migration leads to disease vulnerability, according to researchers

We urge caution when discussing this research and news coverage. The news stories and new research raise genuine concerns. However there is a risk that headlines can slip easily into framings that see migrants as the principle cause of the spread of some diseases – while ignoring other social and political factors. From the news coverage: “Migration and disease brought on by climate change are some of the more precarious impacts looming over vulnerable communities, according to recent reports … The uptick in inter-regional migration is also responsible for an increased prevalence of disease, according to researchers. As more farmers flee their homes, researchers believe that the loneliness of being away from families leaves them vulnerable to contract HIV.Many migrants are also moving towards areas where sandflies are rampant, leaving them susceptible to leismaniasis. TckTckTck

Multilocality in the Global South and North

From the new Translocal Resilience blog: “On 18-19 September 2014, the Technical University of Dortmund held a conference on “Multilocality in the Global South and North: Factors, features and policy implications.” The name of the conference, although broad, has very real implications for our work at TransRe. In fact, Luise and Kayly presented on a panel about the spatial impacts of multilocality, using our project’s preliminary research as fodder for discussion.” TransRe