People are not the problem. Why national security is the wrong frame for migration linked to climate change 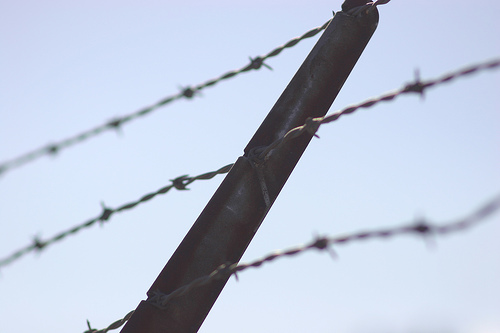 Security is a complex frame because it has several different meanings. Presenting migrants (and refugees) as a threat to personal security and existing cultural identities is a tactic that anti-immigration and nationalist advocacy groups have perfected (along with the right-wing media). This type of security framing promotes strongly self-enhancing values, encouraging a very inward-looking perspective, fear of outsiders, and a nationalistic attitude. Recent psychological research found that people who endorse this type of self-serving security as a value tend to also support military action, be prejudiced towards people unlike themselves, and be less politically engaged.

This is not a progressive frame for promoting engagement with climate linked migration – and while no progressive organisation would explicitly present climate-migration in this way, there is a danger that a focus on migration as a negative impact of climate change could unintentionally promote this framing of the issue. For example, Betsy Hartmann traces the development of a security narrative around environmental migration back to the end of the cold war. As the perceived threat of Communism faded into the background, other issues took prominence, and as the demand for energy, land and water increased globally, the ‘threat’ of refugees produced by population growth and scarcity of resources was promoted by governments and NGOs alike, drawing on the “deep-seated fears and stereotypes of the dark-skinned, over- breeding, dangerous poor”.

Unless communications are carefully tailored, presenting migration alongside negative climate impacts such as rising sea-levels or extreme weather events implies that migration is a threat to be frightened of. This is the wrong type of security framing. However, there is another way of thinking about security – in relation to the rights, safety and wellbeing of vulnerable populations. Using security to motivate concern about vulnerable groups is very different to using security to whip up fear about the threat of an invading out-group. So how can a security frame be used in the right way? A report by the campaign group Platform and the Public Interest Research Centre argued that although ‘energy security’ could be a problematic frame for increasing public engagement with climate change, there was also scope to approach the issue in a way that was more compatible with progressive values. Security can also relate to populations vulnerable to the impacts of climate change, to conserving and protecting nature, or to the need to shift rapidly to an energy system based on renewables to increase security of supply. This alternative security framing could play an important part in developing a progressive communication strategy for climate change and migration – but it must be clear that the ‘security’ in question is not the self-serving type.

The PIRC / Platform report suggests that while many of the underlying concepts that the ‘right’ type of security framing embodies are suitable for progressive campaigning – justice, interdependence, concern for vulnerable populations and the right to be free from harm – the term ‘security’ itself should be avoided, as the associations with negative values are too strong. So the key to using the security frame successfully is to use ‘human security’ as an organising principle, but not to use the term itself prominently. The media research conducted for our briefing Communicating Climate Change and Migration found that there is not yet a dominant frame in media reporting of climate change and migration. Certain framings were, however, linked predominantly to particular terminology. Use of the word ‘security’ was commonly associated with articles that described ‘refugees’, much less so with articles that talked about ‘migrants’. Looking more closely at the articles that used a security framing, approximately half used a ‘human security’ framing (i.e. food and water security, safety and welfare of vulnerable populations) the other half used a ‘national security’ framing (i.e. potential for conflict, border protection and threats from ‘outsiders’), with an equal split for both the ‘migrant’ and ‘refugee’ search terms. These results suggest that – in the same way that there is not yet a dominant media frame for reporting about climate change and migration – the security frame has not yet become strongly associated with one particular set of values. This means that there is a genuine window of opportunity for pro-actively influencing the language and framing of climate change and migration in the media.

This is an edited extract from our recent report Communicating Climate Change and Migration.