Interactive Google Map – Historical migration and displacement in the Pacific 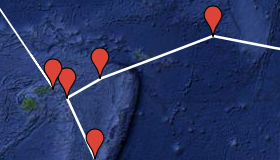 Cyclone Pam raised the question of population relocation in the Pacific. The idea of people moving within the Pacific is often presented as entirely new. The media present Pacific people as unchanging, having inhabited the same place for milenia. For some people this is true, however the history of the Pacific has also been shaped by people moving. Much of this has been forced movement. Entire populations were removed and relocated, at various points by slavers, colonial authorities or foreign governments.

This history is vitally important to thinking about climate driven migration, displacement and relocation in the Pacific. We’ve mapped some of these relocations and episodes of migration on to a Google Maps layer. We’ll be adding more over the coming weeks.

During the 19th Century the practice of tricking — or simply capturing —  people from Pacific islands was rife. Ships cruised the Pacific capturing people and taking them to work on plantations in Australia, Peru and Fiji. The Polyneisan islands were target during the 1860s, primarily by slavers taking people to Peru.

The Google Map shows the places a group on Tongan slaves were transported to. They were captured on Ata atoll in Tonga. They were transported to a Callau on the West coast of Peru. By the time they arrived, the Peruvian government had banned slavery, so they were put on another ship to be sent back. A corrupt ex-Slaver got he contract to transport them, but dumped them on an uninhabited island of the coast of Costa Rica. When the Peruvian government heard, they sent another ship to retrive them. By this point many had died of small pox. Rather than returning them to Tonga, they took them to Paita, a town in northern Peru. 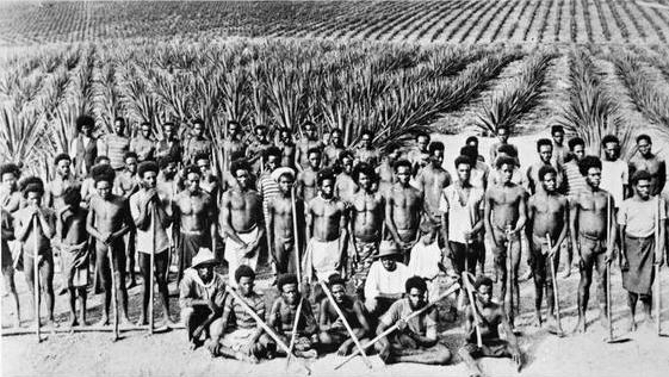 In 1945 the population of Banaba Island (Ocean Island as it was called) were move to Rabi island in Fiji. The company mining the island had been agitating to have the citizens moved for decades. The Banabans moved from what is now part of Kiribati to what is now part of Fiji.

In 1936 British colonial authorities decided that the Souther Gilbert Islands (now Kiribati) were too crowded. They also wanted to extend the British presence further East into the Pacific. So they moved people to the remote and unihabited Pheonic islands. Having British subjects living on the islands would extend the British sphere on influce in the region. The reloaction did no go well. The islands we badly affected by drought. The onset of the second World War made supplying the islands almost impossible. By 1963 British authories decided that the plan had been a total failure and evacuated the islands. 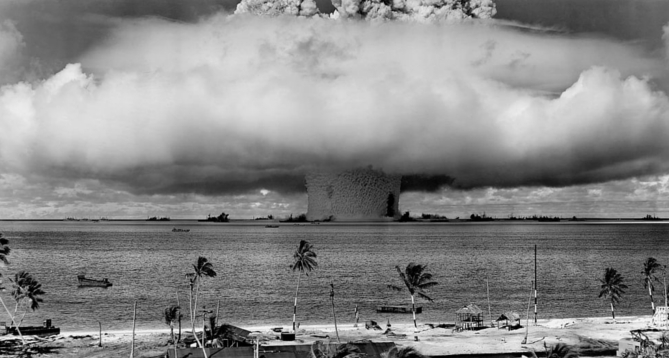 Many people were moved, re-moved and evacuated during US nuclear tests in the Pacific. The most famous relocation is of Bikini Atoll, which becme the centre of three decades of nuclear explosions. However the story of the nuclear relocations is not simple. People were not moved once, to a new safe location. For example, the Bikini residents were moved, then moved again when their new home was completely unlivable. Hundreds of people were also evacuated from supposidlty safe islands they had been relocated to. Botched nuclear tests sometimes meant whole populations were suddenly exposed to falling radioactive ash, and had to be suddenly evacuated, and then perminetly relocated.

In 1946 the US Navy moved the population of Bikini atoll to Rongerik, 200 Km to the East. By 1948 it was clear that Rongerik was uninhabitable and they were moved again to Kwajalein.

In 1954 the US detomated a bomb with 1000 times the power of the weapon that destroyed Hiroshima. The “unfavourable” weather conditions meant that the Bikini islanders (who had already been relocated) were exposed to high levels of nuclear fall out. The wind blew a fine layer of radioactive grey dust over their new islands. Two days later the Navy arrived and evacuated the islands.

The examples here paint a picture of failed and botched relocations. While distressing, these stories are vital to understanding how relocations have failed in the past. When the impacts of climate change require yet more movement in the Pacific this history -and the lessons from it – become vitally important.