Exploring the complex connections between rainfall, livelihoods and migration 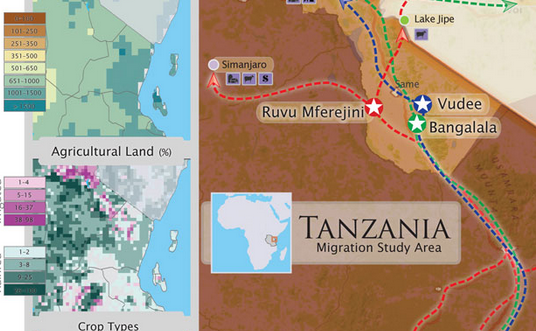 A new of series of maps have just been released which help illustrate the complex relationships between climate change, rainfall, livelihoods, water and migration. The maps are part of the Where the Rain Falls project, a collaboration involving CARE International and the University of the United Nations. The research looks at how migration is becoming a common adaptive response to water stress caused by changing rain fall patterns. Participants in the survey element of the research consistently pointed to migration as risk management strategy. The conclusions reinforce existing research on migration in response to environmental change. People often migrate seasonally rather than permanently; people move in order to find non-farm work; and one or two household members tend to migrate diversifying household income.

From the Earth Institute blog post: The Center for International Earth Science Information Network (CIESIN) has worked closely with CARE and the United Nations University to develop a series of maps illustrating results from case studies in eight countries for the Where the Rain Falls project. The project aims to illustrate the relationship between rainfall variability and human vulnerability in the context of a changing climate, livelihoods, and migration as a strategic response.

Under the conditions that prevail in Same District, changes in rainfall patterns translate directly into impacts on crop and livestock production and food security. Water scarcity is the most commonly identified problem by the residents of this area, and research participants consistently identified drought as the biggest threat to their livelihoods. Given the dearth of alternative local off-farm employment opportunities, migration is a very important risk management strategy for households in these villages.  Migration patterns vary across the three villages, but seasonal migrants outnumber those migrating for more than six months. Although the largest migration flows seem to be to another rural area,  rural-to-urban migration is also seen, with nearly one-third of survey respondents identifying Tanzania’s capital, Dar es Salaam, as the most common destination.